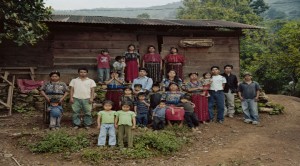 Last Thursday night, moviegoers crowded into the TIFF Bell Lightbox in downtown Toronto to watch the screening of director Pamela Yates’s heavily anticipated Granito: How to Nail a Dictator. Before the film even began, the long line just to get into the theatre was a clear indication that this film resonated with people from all walks of life including students, seniors, and activists.
As the audience was seated and the air of anticipation filled the room, the viewers were greeted by program coordinators from Human Rights Watch and the Human Rights Watch Film Festival itself. The next 100 minutes of film took everyone in the audience on an emotional rollercoaster of sadness, relief, and anger.  Yates managed to balance a portrayal of the plight of the Maya people of Guatemala without trivializing their identity to a mere struggle, as happens in so many documentaries about mass atrocities and human rights. She proved that even through the destitution and tragedy, resilience and strength have sustained the Maya people and from those ashes, leaders have arisen that have been influential on a worldwide stage. Most notably, however, Granitogave hope for the potential for this film, and films like it, to be the necessary stepping stone towards justice for all those whose lives were devastated by the Guatemalan genocide.
After the screening, Pamela Yates joined the audience over Skype and besides praising her for this incredible work, they posed a number of questions about her process of investigation and discovery. Questions ranged from how Yates was able to gain access to some of the footage in her film to how her film fits within the context of the political and economic relationship between Canada’s mining industry and Guatemalan politicians. The many audience questions and comments demonstrated how inspirational the film was, and when questioned on this, Yates humbly noted that her film is merely one in a plethora of other films on the genocide, many of which have been produced in Guatemala.
As the audience left the theatre, the buzz continued outside the theatre. Discussions about Yates, the genocide, and technology took place between strangers and friends, all of whom were brought together by their common interest in this film. Some patrons left simply absorbing all the information they had just been presented; others left with a brochure from the Sentinel Project or Human Rights Watch, as the table outside of the theatre entrance provided the perfect opportunity for our organization to connect with members of the community.
Granito: How to Nail a Dictator was a fascinating experience for all those who had the pleasure of watching. Undoubtedly those who attended the screening on Thursday night were inspired in some way by what they watched and hopefully the film will provide the impetus for people to spread the message about the injustice, impunity, and oppression that happens each day around the world.
The Sentinel Project is working to ensure that these crimes never happen again and that communities at risk of genocide have a way to tell their story. Please support us by becoming a Sustaining Donor and giving a small monthly gift. Your help can go a long way towards a world without genocide.