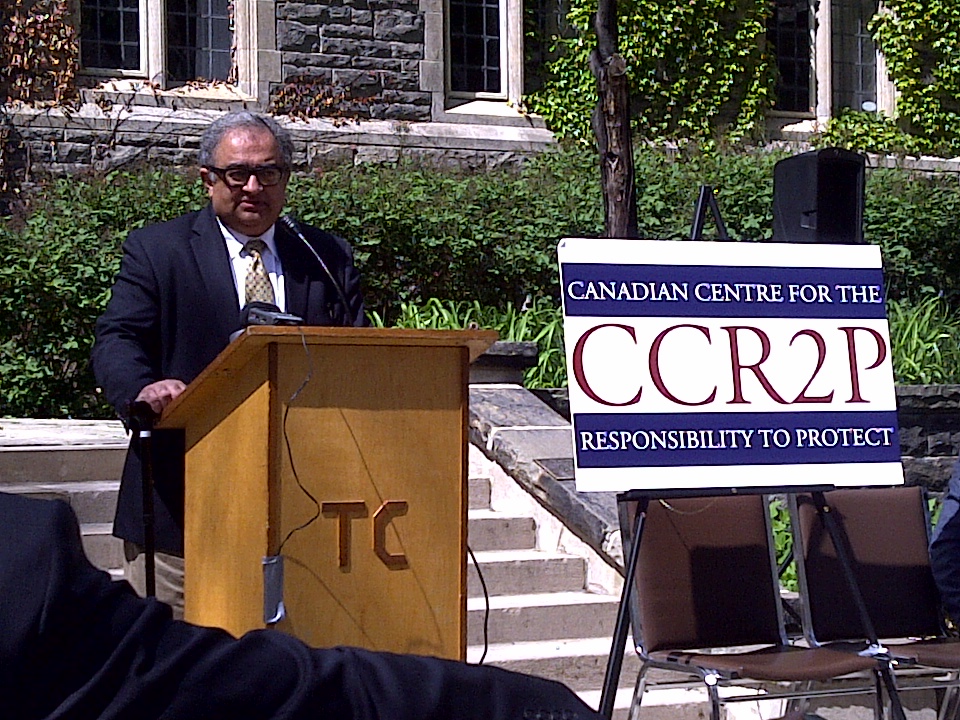 Happy Will to Intervene Day

Tarek Fatah speaks about persecuted minorities around the world and the need to give them a voice in Canada.

In an uncommon and very welcome move, Toronto City Council recently declared May 10 to be Will to Intervene Day. This move is the result of a joint initiative by the Montreal Institute for Genocide and Human Rights Studies (MIGS) and the Canadian Centre for the Responsibility to Protect (CCR2P). Together, these two organization marked today with a series of afternoon speeches in the Trinity College quad at the University of Toronto. From the Sentinel Project team, Elizabeth, Sheldbe, Abhishek, and I all attended the event and I must add that despite the serious subject matter we also enjoyed some beautiful weather. Sitting together in the warm sun, we listened to several speakers explain just why the Will to Intervene, or W2I, is such an important next step in developing the concept of the Responsibility to Protect, known as R2P for short.
The W2I project was co-founded at MIGS by Senator Romeo Dallaire and Professor Frank Chalk. Its goal is to make the Canadian and other governments overcome what is seen as an active avoidance of intervention to prevent atrocities around the world. In order to pursue this goal, the W2I team is seeking to change how Canadians view mass atrocities; going forward, stopping them must be seen not only as a moral imperative also as a national security issue in an interconnected world where massacres on the other side of the planet may very well impact public safety right here in North America. Coming just two weeks after the US government announced its new focus on preventing atrocities, W2I Day could not have been timelier.
Naturally, recent events in the Middle East – particularly the NATO intervention in Libya and the lack of intervention in Syria – loomed large this afternoon. As speakers such as Frank Chalk from MIGS, Martha Hall Findlay from CCR2P, and Tarek Fatah, the founder of the Muslim Canadian Congress, explored various issues relating to R2P and W2I, I was still struck by the need for systems of prevention and intervention which are not entirely reliant on government involvement. After all, this is exactly why the Sentinel Project was created, so when we heard Mr. Fatah mentioned the often-ignored persecution of Kurds and Balochs in various countries and how nobody in Canada speaks for these groups which lack influential diasporas, my first thought was that this is where we come in. R2P and W2I are both great initiatives but they still leave room for governments, NATO, and the UN to simply atrocities and to choose to do nothing. Beyond that point, the time has come to start preparing threatened communities to help themselves.