Impressions of Rwanda 18 years after the genocide 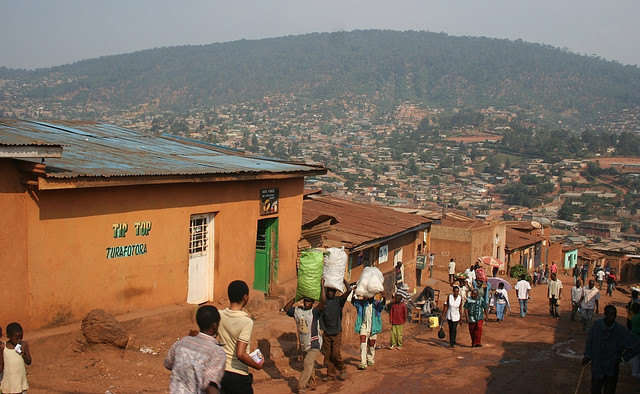 Kigali, Rwanda. More than 800,000 Rwandans, mostly ethnic Tutsis and moderate Hutus, were killed in the 1994 genocide. (Photo courtesy of http://bit.ly/XW8M10).

Between April and June 1994, more than 800,000 ethnic Tutsis and politically moderate Hutus were killed over the span of approximately 100 days, leaving the entire country in ruins and its people reeling in the aftermath.
Today, Rwanda is a more stable country but the scars of the genocide still remain.
The following is a guest post by international relations graduates Rebecca Anne Dixon and Philippe Blanchard on their reflections of visiting Rwanda 18 years after the genocide.
When we announced our plans to tour Rwanda, many of our family members and friends looked us upon us with concern. “Be careful,” they said, “is it safe there?” We tried to explain to them that Rwanda is a very stable country now, and that Kigali is considered the safest city in Eastern Africa, but the main thing that they all associated the country with was the 1994 genocide that saw an estimated 800,000 people murdered because of their ethnicity. Throughout our trip, we often discussed how excited we were to show people at home how much more there is to Rwanda than the genocide and yet, it was impossible to be there without reflecting on what happened.
When sitting on a terrace by Lake Kivu or walking through Kigali, it was extremely difficult to imagine that a massacre of that scale took place in those same streets, only 18 years ago. Even after visiting some of the genocide memorials – some educational, some moving, and some filling us with horror and grief that is difficult to express – we would walk out, still in shock, into a town where people were busily going about their daily lives, laughing with their friends, or running to catch a bus. We wondered how people coped with having sites of such horror and brutality next to their homes, schools, and businesses, and if they could manage to not think of it when passing by.
It’s important for Rwandans to move beyond this sad chapter of their history and build a unified, stable country, but we aren’t certain that this is really happening. Portraits of Paul Kagame, who was the leader of the Rwandan Patriotic Front (RPF), the militant group that eventually put an end to the genocide and who is now the country’s president, are ubiquitous across the country but his legacy is complicated. Upon taking power, instead of choosing revenge, which could have continued a cycle of violence in the country, he decided to go for reconciliation and unity. While some of the major orchestrators of the genocide were prosecuted for their crimes by the International Criminal Tribunal for Rwanda (ICTR), many who had played a smaller role (but had still murdered people) were allowed to go back to their communities to live next to the neighbours whose families they had killed. Two million people accused of such crimes were tried by community gacaca courts, which were only closed in June of this year. Justice has been a long and challenging path. Keeping this type of situation from turning into a new conflict has necessitated very strict governance by Kagame, which has led many to call his government a dictatorship. He has cracked down on dissenting journalists and members of the government, and there are accusations of aid and investment being used to favour Tutsi communities.
As a result of everything that has happened, we felt the country was still trying to emerge from its difficult past. One of the main challenges we noticed was the language. Rwanda was originally a Belgian colony, and after Kinyarwanda, most people learned French. However, the RPF were mostly exiles who had grown up in Uganda with English as their second language, so when it took power the second language of Rwanda became English. This switch meant that older people are no longer competitive in the job market unless they learn English, and younger people are expected to learn English in school but for the most part, can’t practice it with their parents. As tourists, we found that most people we came across didn’t know enough of either language to be able to have a conversation. We would often just repeat what we were trying to communicate in both languages, hoping the message would get through and it mostly did.
Many Rwandans seem eager to put aside the stigma of the genocide in order to increase business and attract tourists. After the genocide, many exiled and expatriate Rwandans (mostly Tutsis) returned to the country and replaced the population almost one for one. There is a large segment of the population that did not actually live through the genocide but are dealing with its aftermath. This is probably one of the reasons that any enduring trauma is not apparent to outsiders and that the people we spoke to seemed eager to move on.
We enjoyed our time in Rwanda and would certainly recommend it to others, especially as tourism continues to develop in the next few years. We hope these reflections may lead to more discussion around how a country and its people can deal with the legacy of genocide.
Posted in: Africagenocidepaul kagamerwanda