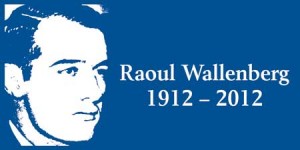 A few weeks ago volunteers at the Sentinel Project were invited to attend the opening of the “To Me, There’s No Other Choice – Raoul Wallenberg 1912-2012” exhibit at the Toronto Reference Library. Highlighting the life and humanitarian work of Raoul Wallenberg, a dedicated Swedish diplomat, whose efforts in 1944 saved tens of thousands of Hungarian Jews during the Holocaust, this exhibit was created to pay tribute to the courageous actions of a single individual.
The exhibit reminds viewers about the value of courage and the extraordinary impact a person can have when he or she decides to stand up against mass violence. While commemorating Wallenberg’s past deeds, it also functions by emphasizing today’s current need for continued human rights initiatives and international support.
Multiple keynote speakers who addressed the crowd echoed similar sentiments regarding genocide awareness and prevention, as well as the potential inherent in all individuals to make a difference. Declaring the need for continued awareness, education and prevention efforts, the speakers urged for actions be taken to avoid repeating the events that occurred during the Holocaust. In lieu of the recent number of violent conflicts that continue to wage around the world, humanitarian efforts and initiatives like those performed by Raoul Wallenberg are essential to preventing and halting mass violence.
For those of us at the Sentinel Project, Raoul Wallenberg and his legacy represent inspiring examples of humanitarianism and communicate the ability that everyone can make a difference.
To find out more about the Toronto exhibit, visit: http://torontopubliclibrary.typepad.com/trl/2013/01/raoul-wallenberg-exhibit-opening-event-mon-jan-14-2013-700-pm-830-pm-toronto-reference-library-atrium-to.html and for global exhibits, visit: http://www.swedenabroad.com/en-GB/Embassies/Ottawa/Current-affairs/Raoul-Wallenberg-1912-2012/
Original words by Kaitlin Conway
Image Credit: http://www.government.se/sb/d/15163