The Crime of Barbarity III 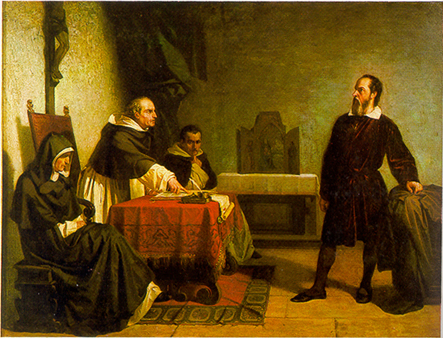 “And yet, it moves.” In July 1633, Galileo Galilei was rumored to have muttered this phrase after receiving his sentence at the Roman Inquisition for alleging, heretically, that the Earth was not, in fact, stationary at the center of universe. The hypothesis refuted almost two millennia of established belief that the universe was geocentric – that the planets and sun rotated around Earth. The notion that God would not have placed his prized creation at the center of this system was disconcerting, not least for the most powerful organization in Europe at the time, the Roman Catholic Church. The prime proponent in the new age of motion, a deeply religious astronomer, tried to reason with the Church: “The Bible shows the way to go to heaven, not the way the heavens go.” He lived the rest of his life under house arrest.
Last week I wrote about the dominance in Europe of Aristotle’s physics. His ideas formed a logical system which, when disturbed by problems with the geocentric model, put into question everything Aristotle had done, including his ethics. Aristotle assumed that like the motionless Earth, humanity’s natural state was not war, but rest – peace. This was logically consistent with the motionlessness of the universe. But what if, like his physics, he was also wrong about man?
Galileo’s inverse assumption, that the natural state of matter was not rest, but motion, revolutionized science, or natural philosophy as it was called in his time. In politics, an English philosopher named Thomas Hobbes was the most influential thinker to make an inverse assumption about mankind. Inspired by Galileo’s discovery, Hobbes posited that perhaps man’s natural state is a state of war, a state of motion, and not rest. In the midst of civil war, Hobbes argued that just as the natural state of matter was motion, perhaps the natural state of man was war, a “war of all against all,” and to counter this natural state a strong government, a Leviathan, was needed to control this human motion.
As I’ve stated before, Kuhn’s The Structure of Scientific Revolutions established that scientific world-views are invisible, meaning that they cannot be seen by people living under their all-pervasive paradigms. No one could have guessed in the 17th century that science would not be able to attain absolute, perfect, and logically consistent knowledge as classical philosophy had assumed. It was not until the discoveries of Charles Darwin and Albert Einstein in the late 19th and early 20th centuries that this fatal truth started to become apparent.
In Hobbes’ time, the role of natural philosophy was to discover “laws” that governed the universe. Natural laws, like morality, were unchanging and universal, so there was no danger, in the minds of men like Hobbes, to base political philosophy, at its heart a moral endeavour, on the discoveries of science. As the ideological foundation of states began to reform along the lines of mechanistic science, the science of men like Galileo and Isaac Newton, it was not suspected that the science would someday be disproved, and that the moral foundation of societies based on mechanistic science could be undercut.
Hobbes’ most significant innovation could not be seen at the time. It amounted to the widespread acceptance that in the future, science, not universal and unchanging concepts of right and wrong, would dictate future concepts of morality. Man, according to the new physics, was naturally in motion, naturally at war, naturally evil. The dialectical view of history, the idea that history is driven not by the ideals of peace and cooperation, but by war and conflict, would become the prime inspiration for violent movements in the 19th and 20th centuries.
The subordination of morality to science would come at a massive cost. Hobbes’ hope was that since all mankind’s “motion,” their desires and passions, were finite and predictable, war could eventually be preempted by science. What resulted, the dialectical version of man, a view of groups in conflict, would eventually lead to attempts to achieve peace by eliminating the offending class of humans. This culmination required first the reformation of human social structures on the basis of mechanistic science, a topic we will explore next week.
Read Part IV – http://thesentinelproject.org/the-crime-of-barbarity-iv/
Read Part II – http://thesentinelproject.org/the-crime-of-barbarity-ii/