We are pleased to announce the launch of a new live visualization of the situation in Burma, though we are equally dismayed at the escalating persecution of the Rohingya Muslim minority that it displays. Nonetheless, the Sentinel Project team is confident that this new tool will be valuable not only to our own analysts but also to the general public as we seek a deeper understanding of the situation in Burma. That understanding will help our analysts to be more forward looking and ultimately produce more accurate forecasts and warnings about future developments in Burma. 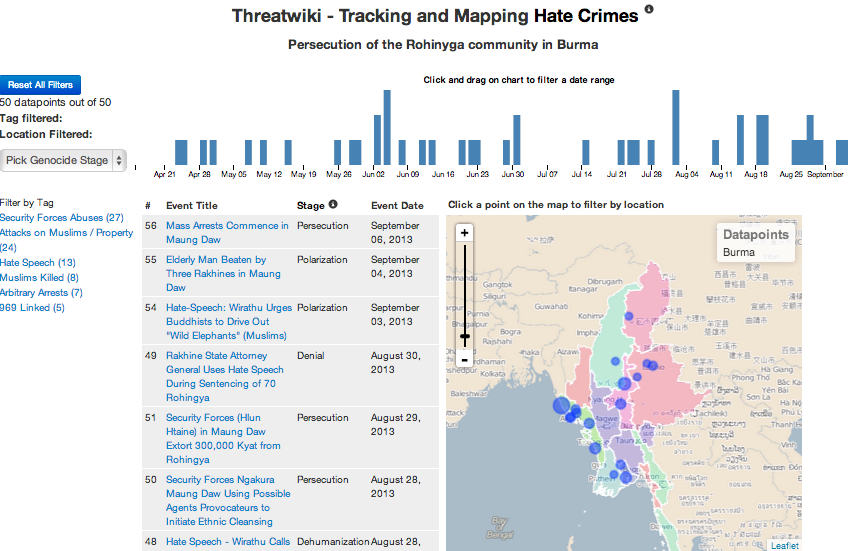 Preview of the Burma Visualization

Mapping and situation visualization technology has a history of contributing to peace. For example, during the summer of 1995 the ethnic cleansing and genocide of Muslims which had characterized the war in in Bosnia-Herzegovina intensified. What was notable about the Dayton Accords peace agreement that ended the conflict was that it was the first time geospatial information systems (GIS) had been used in the service of diplomacy as ethnic enclaves were accurately mapped out in order to provide border proposals that provided maximum security for minorities and past victims of violence. This success showed that GIS would be vital in the service of peace in the future.

It is with the notable historical success of GIS in mind not only for state-level interactions but also the civilian crisis mapping initiatives of recent years that the Sentinel Project continues to develop and utilize GIS technology such as our Threatwiki situation tracking software in the service of predicting and preventing mass atrocities. Beginning in March 2013, the Sentinel Project has conducted daily collection of information on anti-Muslim activity in Burma and mapping open-source reports to illustrate patterns of violence, the intensity of conflict, and the frequency of events. Ultimately, our goal is for this understanding of both past and present events in Burma to inform our predictions and warnings about the future.

The event map and timeline produced by Threatwiki confirms some well-understood truths about the situation in Burma. Most conflict is concentrated in the western part of the country, namely Rakhine State, where the majority of Rohingya Muslims live. Less intuitively, however, Threatwiki also shows that security force abuses, violence, persecution, hate speech, and attacks linked to the ultra-nationalist 969 movement have occurred virtually all across Burma, even in areas where the Muslim population is more sparse. While hotspots such as Maung Daw and Thandwe have seen increased activity this year, anti-Muslim activity is simultaneously spreading to more locations than ever. As the larger Muslim populations in areas like Meiktila and Sittwe are cleansed and concentrated into sealed ghettos and internally displaced persons (IDP) camps, it appears that smaller and smaller enclaves are the scene of inter-ethnic provocation and violence.

Abuses by Burmese security forces are also widespread in Burma and Threatwiki illustrates a concentration of incidents in Maung Daw, in northern Rakhine State. The security forces in Maung Daw have been particularly active against the Rohingya, committing acts of rape, extortion, assault robbery, and attempting to register Rohingya as “Bengali” with the apparent purpose of either undermining their legal right to live in Burma or as a method of drawing up death lists in preparation for mass killing. As both a border area through which many Rohingya have fled to IDP camps in Bangladesh and an area of strong persecution, Maung Daw is a particular area of concern for the Sentinel Project, which is reflected in the activity levels shown there in Threatwiki. Read more about our full risk assessment on the high risk of genocide on our blog.
Access the Sentinel Project’s Burma Visualization at this link: http://threatwiki.thesentinelproject.org/burmavisualization and contact us by email at burmasoc@thesentinelproject.org for any feedback or questions.
In May 2013 we also launched a visualization of the persecution of the Baha’i community in Iran.