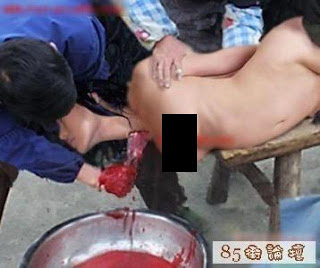 An image of a group of men cutting the neck of a woman and pouring her blood into a basin has been posted on Wirathu’s Facebook page in an attempt to incite animosity toward Muslims in Burma. Various elements of the image, including certain parts that are more in focus than others and changes to the background, indicate that it is fake. Our researchers have discovered that the picture has been used before against other groups, such as on this website where the Chinese were made to look like cannibals.

The use of slanderous speech and images has historically been a common tactic by hate groups who have the intent to discredit and dehumanize a targeted group, especially regarding allegedly barbarous religious practice. For instance, the anti-Jewish blood libel was used to further anti-Semitism, and was common throughout Europe for centuries. Despite the graphic nature, we at the Sentinel Project believe that it is important for this picture to be circulated in order to demonstrate its falseness and to call further attention to the actions of Wirathu and his intent to provoke hostility toward Muslims. In addition, it is necessary to highlight the connections between the situation in Burma and mass atrocities of the past.