The Victims of Drone Strikes 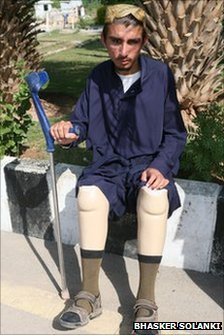 Saadullah was injured in a drone attack in 2011, losing his eye and both legs.

Last week Pakistani girls’ education activist Malala Yousafzai visited US President Barack Obama at the White House.  Malala had been targeted by the Taliban for campaigning for girls’ education in Pakistan, and was shot in the head on her way home from school in October 2012.

Ms. Yousafzai has persevered through her injuries and adamantly continues her campaign to make education accessible to girls. During her recent visit with Obama she voiced another human rights concern: the use of drones for military strikes.

“I thanked President Obama for the United States’ work in supporting education in Pakistan and Afghanistan and for Syrian refugees. I also expressed my concerns that drone attacks are fueling terrorism. Innocent victims are killed in these acts, and they lead to resentment among the Pakistani people. If we refocus efforts on education it will make a big impact,” she said.

Obama claims to be operating under strict stipulations – only under circumstances of “continuing, imminent threat,” when the capture of said threats is not possible, and when there is near-certainty that civilians will not be harmed.  However HRW points out that two recent casualties of targeted drone attacks in the Arab Peninsula may have been teenage boys with no link to violent jihadist groups.

In 2009 then director of the CIA, Leon Panetta, defended the use of drones:

“We have targeted those who are enemies of the United States,” he said. ” When we use it, it is very precise and it limits collateral damage.”

In July 2013 a Pakistani report, entitled “Details of Attacks by Nato Forces/Predators in FATA” (Pakistan’s Federally Administered Tribal Areas), was released and served as the first internal assessment of the United States’ lethal drones strikes in Pakistan. It stated that US drones killed scores of civilians between 2006-2009, nearly 100 of them children, and detailed 75 drone strikes and their so called collateral damage.  The report states that out of 746 people killed by drones in that period, at least 147 “are clearly stated to be civilian victims, 94 of those are said to be children.”

The United States questioned the credibility of these findings but has not disclosed any information regarding their determination of the casualty rate. Several independent organisations have estimated that upwards of 2,000 people have been killed by drones since 2004.

Notwithstanding these disturbing casualty estimates, White House Press Secretary Jay Carney has stated that “These strikes are legal, they are ethical and they are wise.”

But are they legal?  Many experts contend that “targeted” drone strikes constitute a breach of international law. For example, Pakistani lawyer Mirza Shahzad Akbar maintains that in many tribal areas of Pakistan, militants and civilians would be indistinguishable from one another.  Men would be bearded, wearing turbans and dressed similarly.  Thus, “targeted killings” defy the Geneva code and its protocols, as they are unable to detect if individuals and groups are civilians or not.  Additionally, drones do not give the option of surrender.  They are not always able to identify when an individual is wounded and hors de combat, or has the intention of conceding and laying down their arms.

The international community has yet to establish regulations on the use of drones. Until the Geneva Convention governs this use, they will continue to be deployed indiscriminately against both militants and civilians, with no account taken for the innocent lives lost.

While international customary law is catching up with the need to protect civilians from illegal drone strikes, the international community should begin to seriously consider using drones for peaceful endeavours.  The next article in this series will discuss the benefits and practicality of using drones to protect human rights.