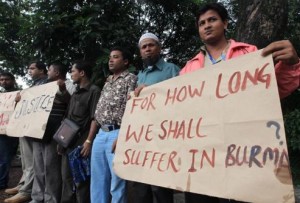 In the month of December 2013, Reuters revealed shocking details about the system of human trafficking created to handle the expulsion of Rohingya and other Muslims from Burma, also known as Myanmar. The agency discovered that the Thailand government was selling Rohingya refugees to human traffickers who were forcing them into a system of “gulag” like camps in the jungle near the Thai/Malaysian border. On 17 December, the Sentinel Project reported on these findings in The Business of Extermination – Making a “Killing” from Genocide in Burma.[1]
The practice of government agencies selling Rohingya to human traffickers is unfortunately not uncommon. On 26 December, a report was published by Phucket Wan, a Thai news outlet, revealing that 139 Rohingya were sold or given by the Burmese navy to human traffickers who extorted, physically beat, and even killed some victims.[2] A follow-up report noted the disappearance of all 139 Rohingya – possibly into the trafficking market or into refugee camps.
On December 30, unconfirmed eye-witness reports noted that Rakhine police forced 54 Rohingya onto boats and out of Rakhine State against their will. The government and security forces’ roles in ethnic cleansing have not diminished and the official involvement of Burma in possible genocide is evident as an underwriting foundation to the civilian threat posed by the 969 movement, an organization connected to religious extremists but with strong political defenders in Naypyidaw.
December 2013 was projected to herald final and lasting freedom to prisoners of conscience in Burma as during this past summer Thein Sein’s government proclaimed the release of all political prisoners by years end. However, a fact-checking article published by the Washington Post noted that many if not all releases were “conditional” with some prisoners being re-arrested shortly after on charges dating back years. In addition, approximately 1,000 Rohingya prisoners were not considered for release, contrary to the government’s pledge to halt political persecution. [3]
The Roman Catholic Church joined the chorus of voices calling for the recognition of human rights for the Rohingya, including the most important right of citizenship. In a New Year’s message, the Archbishop of Yangon, Charles Bo, stated that the denial of Rohingya citizenship must be brought to an end: “Every person born in Myanmar should be recognized as a citizen.” The citizenship of the Muslim minority was removed by law in 1989, making the Rohingya stateless and without protection under law.
The Rohingya and other Muslim minorities have continued to face hardship in 2013 with no end in sight. Political moderates such as Aung San Suu Kyi, the much-lauded pro-democracy activist and Nobel-laureate have refused to speak out on the plight of the Rohingya out of political expedience. The unpopularity of the Muslim minority may ultimately mean genocide and ethnic cleansing could continue even given further reforms toward democracy. In the transition phase, states tend to risk a greater chance of genocide and massacres as power is reallocated and groups see themselves as threatened from without by the process and as possible targets of revenge. The situation of the Rohingya is thus likely to remain precarious in the new year barring unlikely and unpopular drastic and sweeping reform by the local and federal governments.
[1] http://thesentinelproject.org/the-business-of-extermination-making-a-killing-from-genocide-in-burma/
[2] http://phuketwan.com/tourism/north-phuket-rohingya-tell-killings-beatings-nightmare-voyage-burma-19454/
[3] http://www.washingtonpost.com/blogs/fact-checker/wp/2013/12/31/how-much-has-the-united-states-been-standing-up-against-atrocities-in-burma/