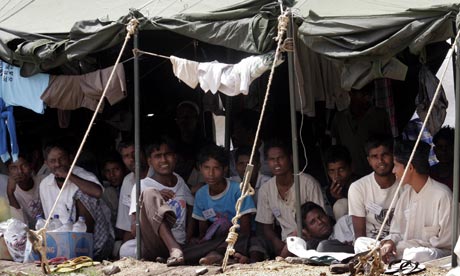 It is often noted by observers of the continued violence in Burma that the crippling poverty in the country’s western-most Rakhine State is part of the root cause of the anti-Rohingya campaign. Lack of hope, historical animosity, and other grim conditions in Burma are exacerbated in its poorest regions where survival on less than two dollars a day is common. Easing poverty may be a key to easing ethnic tensions in Rakhine state and some positive developments have occurred amid more emerging negative news.
In January, 2014, World Bank President Jim Yong Kim announced plans of a $2 Billion dollar program to improve access to health care and energy in Burma.[1] A portion of this money will be used to deliver universal health to residents of Burma by the year 2030.[2] A significant amount of the money will be used to improve access to electricity in the country.[3]  “Expanding access to electricity in a country like Myanmar can help transform a society. Children will be able to study at night, shops will stay open, and health clinics will have lights and energy to power life-saving technology. Electricity helps brings an end to poverty” Kim said.[4] Any effort to reduce poverty, even if the Rohingya are purposely excluded, may abate violence as conditions improving among the Buddhist Rakhine may leave less room for hate propaganda. An improvement in standards of living and quality of life could possibly result in a reduction in tension amongst the two ethnic groups.
In January, the Burmese government also announced that it had released 96 children from the Burmese Armed Forces.[5] This represents the largest single release of children from the Burmese armed forces since the government of Burma signed a pact with the United Nations on this issue in June of 2012.[6]
News of progress in Burma in January was largely offset by eruptions of violence against Muslim Rohingya near Maung Daw. Between January 9th and 14th a series of violent incidents occurred between Security Forces allied with Buddhist Mobs against Muslims continuing a pattern of unrest within Rakhine state. This follows a trend that has been occurring since approximately June of 2012. In response to this chain of violence, United Nations Human Rights Chief Navi Pallay is calling for an investigation.[7]
It has been reported that this specific sequence of violence began on January 9th when eight Muslim men were attacked at Du Char yar Tan village.[8] In response to this a Burmese police officer was allegedly slain by Rohingya Muslims on January 13th. Based on past occurrences, it was predictable that the alleged killing of the Rakhine officer would set off an intense period of violence and led to the killing of Muslims, at least 40 of which were killed by security forces in  Buddhist Rakhines in the area.[9] This eruption of violence is similar to many of the other episodes that have occurred within Burma and also been reported by the Sentinel Project. After a crime or alleged crime is committed by a Muslim or Muslims, there is a swift response of organized violence.
As of now, the government of Burma is only acknowledging the death of the police officer. A spokesman of the Burmese government has stated that the government “strongly objects” to the United Nations claims that at least 40 Rohingya Muslims have been killed in this latest episode.[10] At this moment it is unclear whether or not local government officials played a role in planning or executing the killings that occurred between January 9th and 14th. One of the difficulties in determining who exactly is responsible for what within that part of the country is that the government has essentially made it off limits to journalists and aid workers. Therefore much of the news travels by word of mouth. In this particular instance, the United Nations has stated that it relied on witnesses and victims of the violence for details on what occurred.[11] The United Nations has also indicated that it supports the notion of the Burmese government authorizing an official impartial investigation in order to determine what exactly happened. Based on the position of the current government, it is unlikely that this will occur. It is encouraging to see that the United Nations has become more vocal on the situation within Burma.
[1] http://www.worldbank.org/en/news/feature/2014/01/26/emerging-myanmar-aims-catch-up-neighbors
[2] http://www.worldbank.org/en/news/feature/2014/01/26/emerging-myanmar-aims-catch-up-neighbors
[3] http://www.bbc.co.uk/news/business-25903687
[4] http://www.bbc.co.uk/news/business-25903687
[5] http://www.news.com.au/world/myanmar-frees-scores-of-child-soldiers-from-armed-forces-un/story-fndir2ev-1226805031497
[6] http://www.news.com.au/world/myanmar-frees-scores-of-child-soldiers-from-armed-forces-un/story-fndir2ev-1226805031497
[7] http://www.bbc.co.uk/news/world-asia-25866350
[8] http://www.bbc.co.uk/news/world-asia-25866350
[9] http://www.bbc.co.uk/news/world-asia-25866350
[10] http://www.cbsnews.com/news/un-dozens-of-rohingya-muslims-massacred-by-buddhists-in-rakhine-burma/
[11] http://www.cbsnews.com/news/un-dozens-of-rohingya-muslims-massacred-by-buddhists-in-rakhine-burma/