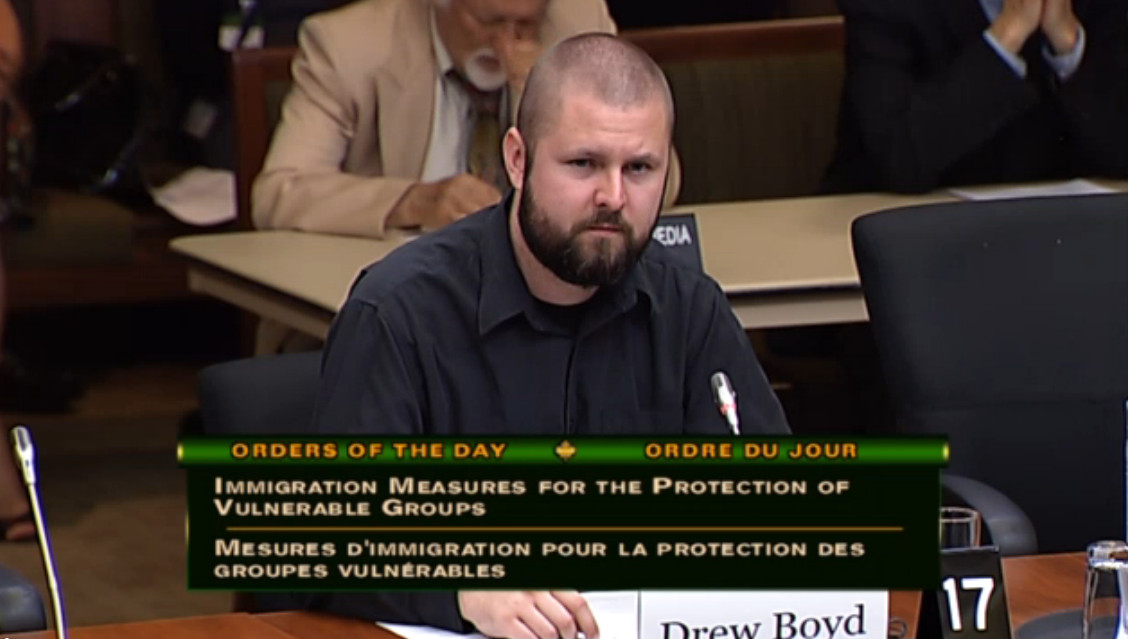 The Sentinel Project Testifies to Parliamentarians on Assisting Vulnerable Peoples

On Wednesday morning the Sentinel Project, represented by Director of Operations Drew Boyd, provided expert testimony to the Standing Committee on Citizenship and Immigration on how Canada can assist vulnerable minorities threatened by mass atrocities.

Last month, Minister of Foreign Affairs Stéphane Dion officially declared that the atrocities committed against the Yazidi people by the Islamic State constituted genocide. Citing a recent United Nations report that highlights violations including killings, torture, rape and sexual slavery, forced religious conversions, and the conscription of children, Mr Dion stated:  “For the first time, an independent study by the UN has concluded that genocide was committed by the so-called Islamic State against the Yazidis. Given this evidence, our government believes that genocide against the Yazidis is currently ongoing.”

The Sentinel Project was called to speak before the parliamentary committee in Ottawa for its longstanding efforts in atrocity prevention both in Myanmar (formerly Burma) and rural Kenya.  Mr Boyd offered insight on the significant obstacle of accessibility while working in hostile environments, both in terms of the ability of the organization to provide timely assistance where it is needed, but also for the threatened communities themselves to participate in the programs aimed to benefit them.

“How does one bridge the gap caused by the disarray and uncertainty caused by violence or exacerbated geography?” asked Mr Boyd. “In our experience at least part of the solution is to investigate the role of under-utilized information and communication infrastructure already in place and to build capable, objective-driven systems on top of it.”

Extreme targeting of marginalized communities, such as the atrocities being committed in Northern Iraq, is unique in the unprecedented challenges that it creates, and consequently requires creative responses.  The Sentinel Project encourages the Government of Canada to explore innovative approaches to mitigating mass atrocities. Conventional methods may prove to be insufficient to fully address these crises, but they can have a greater impact and improve their potential for success when supported by the new tools available to us, such as widely accessible mobile telecommunications.

In this light, access to information can be seen as an essential humanitarian resource. Reliable information equips groups whose very existence is endangered to make the best decisions possible while under threat.  Informed decisions may allow vulnerable people to be reunited with displaced family, secure food, shelter and medication, and escape conflict zones to safety.  Canada will be more impactful if it adopts and adapts the available technological tools when responding to the crisis created by those who persecute vulnerable minorities.

Mr Boyd concluded his address by imploring the committee to make an enduring humanitarian commitment to vulnerable groups: “It is also important to recognize that Christian, Shi’a, and particularly Yazidi communities currently face an existential threat at the hands of groups such as the Islamic State. However, just as their persecution did not begin with this extremist organization, neither will it end with them.  Therefore, I encourage the Government of Canada to commit to a long-term view of assistance for marginalized communities in Iraq and the Levant.”

The Sentinel Project remains dedicated in its mission to prevent mass atrocities and is honoured by the opportunity to collaborate with the Standing Committee on Citizenship and Immigration in developing new methods of protecting victimized people worldwide.