New Situation of Concern and Report on Kenya

The Sentinel Project has initiated a new situation of concern (SOC) regarding the high risk of genocide in Kenya. Our research team recently applied the first phase of the early warning process by conducting a comprehensive risk assessment that took into account the set of risk factors identified as increasing the likelihood of genocide in a given country. When applied to Kenya, this model highlighted a society with strained and rivalry-prone inter-ethnic relationships which are exacerbated by severe economic difficulties and political conflict. 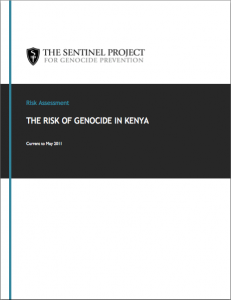 One of the most significant events in recent Kenyan history was the violent conflict in the aftermath of the December 2007 national elections. This two-month period of severe unrest was born out of a political and social order marked by ethnocentrism and inter-tribal antagonism which had produced similar violence during other elections in the past. In the end, this episode of mass violence between groups of ethnically-aligned political supporters killed as many as 1,500 people and displaced hundreds of thousands more.
With another national election scheduled for December 2012, there is a high risk that this pattern will continue and produce further violence which could then escalate into genocide given the right conditions. The Sentinel Project will now begin carefully monitoring events in Kenya to determine whether any of the operational processes that facilitate genocide are taking place in the country. This monitoring effort will also identify the key actors who may try to commit genocide and then forecast what their actions may be.
Although the risk of genocide in Kenya is a very serious matter, initiating this SOC represents a major step forward for the Sentinel Project and we are proud to recognize the contributions of the team members who worked hard on the risk assessment. Thanks go out to Dan Brown, Tracey Chung, Daniel Friedman, and Collin Sullivan, as well as Alan Campbell and Raphaele Bailey for their continuing work on operational process monitoring.
Read the full Kenya risk assessment report.