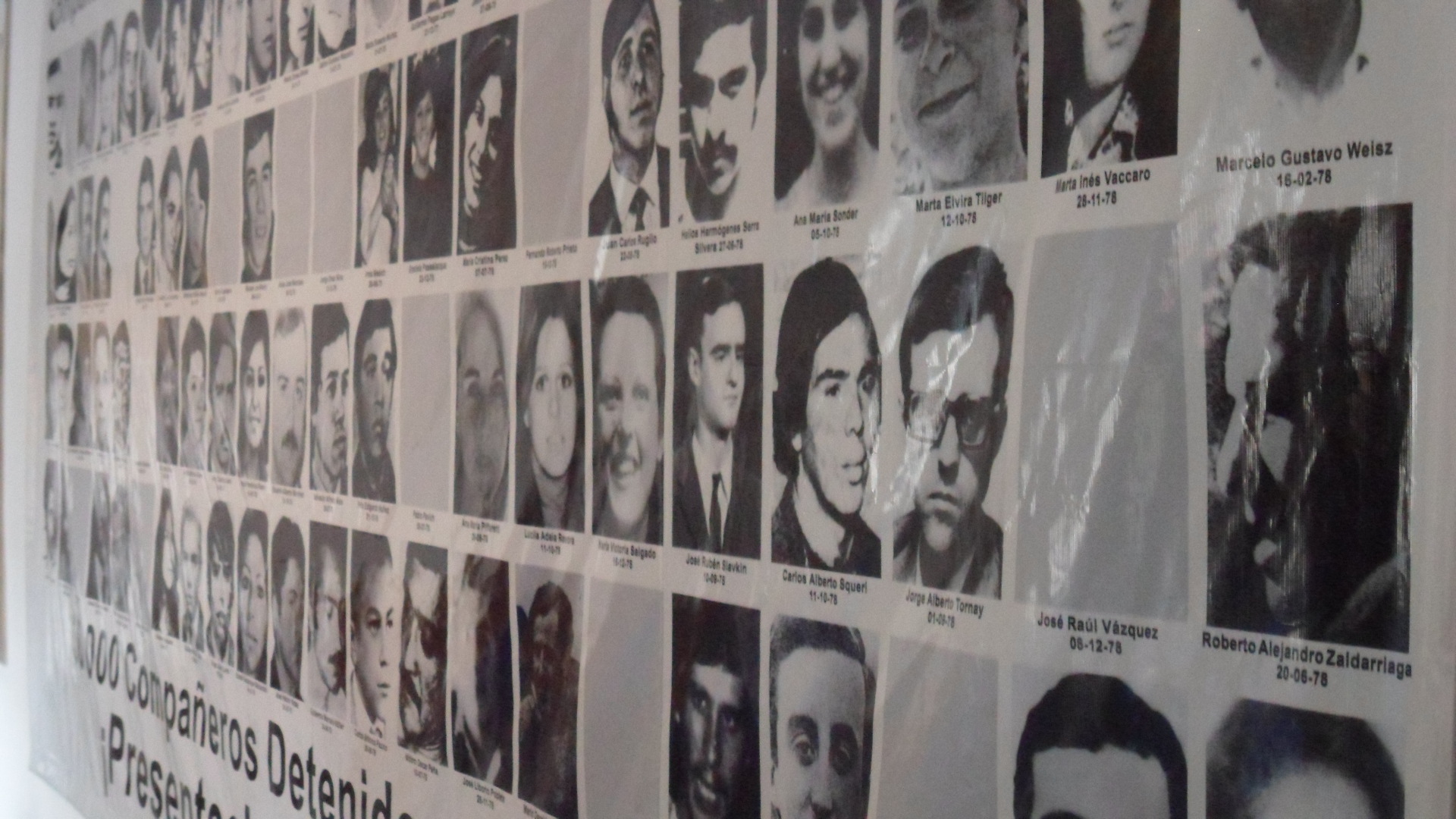 A few weeks ago, I had the great experience of attending a conference of the International Association of Genocide Scholars in Buenos Aires, Argentina. This was an excellent opportunity to meet and connect with a lot of the leading thinkers addressing the problem of genocide, and I will be sure to write another post on the outcomes of the conference itself soon. Right now, though, I want to reflect on an experience that we had before the conference officially started.
Those of us fortunate enough to arrive a couple of days early were invited to participate in an excellent tour of two key sites from Argentina’s recent history. These were two prisons, Olimpo and the Navy Petty-Officers School of Mechanics (known by its Spanish acronym, ESMA), which stand today as living reminders of the nature of state terror. These detention, torture, and killing centres in the capital represent the many more established throughout the country during what is known as the Dirty War. As a time of harsh military dictatorship in the 1970s and 1980s during which many opponents of the regime were “disappeared” and are still unaccounted for, this period is a defining feature of recent Argentine history. 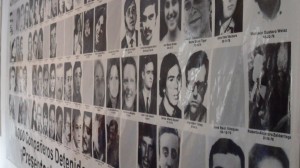 Pictures of some of the people imprisoned at Olimpo and never seen again.

Estimates vary, but somewhere between 10,000 and 30,000 people are thought to have been killed by the government, many of their bodies never being found. The types of atrocities carried out during the Dirty War share some parallels with those often witnessed during genocide. Perhaps the greatest similarity is in the overt use of violence and fear in order to destroy social bonds and control a population for political purposes. The military rulers of Argentina sought to destroy what they saw as a communist threat to national security by killing activists in such as way that other citizens – both sympathizers and neutral bystanders alike – would be frightened into submission. The establishment of Olimpo was an important milestone in this effort because it was the first place that dissidents were not merely imprisoned but also tortured and murdered. It also represented a shift in policy from persecuting just the opposition leadership to people at all levels of society. ­
Olimpo was a temporary detention centre that only operated for six months but despite this relatively short period of operation, an estimated five hundred people were abducted and suffered there. The regime must have considered this an effective testing ground for these new tactics of state repression, because once Olimpo was shut down many of the guards, torturers, and intelligence officers who had worked there moved to other prisons – some secret – that were established throughout the country.
The really remarkable thing about Olimpo is that it was located right in the middle of a residential neighborhood; there are homes and shops all around it. Not only did the perpetrators lack any fear of being discovered, they actually wanted everyone to know what was happening inside those walls. The physical violence happening inside was a form of psychological violence against those outside. The most striking example of this was the bricking up of windows in some cells and torture rooms. They were not completely sealed but rather left open at the top. Our guide explained that this had a dual purpose so that the people outside could not see in but would hear the screams of agony inside and be afraid while those suffering inside would be reminded of life going on without them in the world outside and so despair further. Apparently this had the desired effect because people nearby did not protest the prison. One neighbor even bricked up his own window in order to more easily ignore it. 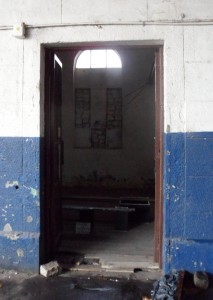 A view inside a room at Olimpo which is very similar to those used for torture. Notice how the window is bricked up enough block the view from outside but is open enough for sound to leave.

Aside from torture and unlawful imprisonment, one of the most disturbing aspects of these prisons was how the “detained-disappeared,” as they are known in Argentina, were killed. Not wanting to use more typical methods of killing such as shooting, the military and police officials showed a sort of evil ingenuity. When prisoners had been condemned to die, they were sedated and taken on “death flights” to be dropped from helicopters into the sea. Most of the bodies were never found.
ESMA took the lessons learned at Olimpo and expanded them to a much larger and more elaborate operation. Continuing what seemed to be a recurring theme of “hidden yet open” repression, the authorities made no serious effort at secrecy here despite also being located in a residential area. In this case, an estimated 5,000 people passed through the centre, of which only 200 survived. Shockingly, this is actually a higher survival rate than at detention centres in other parts of Argentina. Demonstrating yet another unique twist of depravity, pregnant female prisoners were kept alive until they gave birth and then killed while their children were given away to military families. Our guide explained that about 400 Argentines are known to have been raised this way and only a handful have been able to recover their true identities.
As with genocide, Argentina’s experience was an example of a regime seeking to spread fear and destroy the spirit of a population (if not physically exterminate the population itself) by committing atrocities against a portion of it. In the process, the perpetrators dehumanized their victims and committed incredible cruelty against them while maintaining clear consciences. As one of our guides explained, the actual job of torture itself was reserved for officers of the Argentine military and police rather than enlisted men because this “duty” was actually considered to be an honour worthy of gentlemen rather than a brutal crime. Also like many instances of genocide, the perpetrators of atrocities during Argentina’s Dirty War largely escaped justice thanks to the destruction of incriminating documents and other evidence. Some of the most senior leaders were placed on trial following the end of the dictatorship, but the majority of the people who committed abductions, torture, and murders did so with impunity. Fortunately, some are now being arrested and 16 who worked at Olimpo were sentenced last year to life in prison for their crimes.
Some friends and I were fortunate enough to attend a trial related to dictatorship-era atrocities the week after the conference and observed the process of justice at work. Perhaps the most inspiring contribution to the national healing process that I saw in Argentina was that of the young people who worked as guides at Olimpo and ESMA. All of them were born after the military dictatorship ended and yet they feel a strong need to preserve the memory of these crimes so that they would not happen again. During our tours, they made frequent references to small acts of resistance which took place in the detention centres and explained how the detained-disappeared maintained their humanity this way. At the same time, this was contrasted with reports of many people in Argentine society, including public figures, who still today advocate for a return to the supposedly better times under the dictatorship. It seemed as though the guides told these stories as a way to continue the struggle for human rights and inspire their own generation and those after them to participate in their relatively new democracy without fear of repression so that the crimes of the past would never happen again.