Humanitarian intelligence: Are UAVs the next step?

[Please note that these are my own personal thoughts and not official Sentinel Project policy.]
Lately I’ve been reflecting on our work here at the Sentinel Project and exactly what it means. We obviously talk a lot about prevention and the key role played by early warning but sometimes we might seem a bit unclear on how exactly this should work. It’s admittedly a complex topic but it recently occurred to me that on a really practical level what we’re trying to do is adapt many of the tools and techniques of the intelligence community for the purpose of preventing genocide. The sooner we embrace that fact, the more successful we will be. It makes perfect sense; after all, intelligence professionals who work for governments and militaries are focused on gathering and analyzing information to predict future events and the actions of adversaries. That’s exactly what we want to do, though we’re very focused on specific situations – genocide and the events leading up to it – and our “adversaries” are the potential perpetrators.
The business world has already been doing its own form of “intelligence” for years as companies try to get an edge on the competition. Fortunately, humanitarians are now starting to take a similar approach to predicting or at least documenting atrocities using new methods. Last year saw the launch of the Satellite Sentinel Project (which brought us no end of name confusion), a fascinating effort by several organizations cooperating to document atrocities and military movements related to tensions between Sudan and South Sudan. Using satellite imagery, they have attempted to corroborate ground reports in ways not previously available to human rights professionals. Lately there has been a growing conversation about the role of the official intelligence community’s role in atrocity prevention. Michael Dobbs has been blogging at Foreign Policy about the Srebrenica massacre and what western intelligence agencies knew about it before, during, and after the killing. Daniel Solomon, the student director for STAND in the US, also has a great blog post on what the intelligence community can and cannot do to prevent atrocities. Both are worth a read.
Leaving aside state-based agencies, what tools and techniques can civil society adopt from governments? Well, in short, everything. Sure, we don’t have the resources that governments do but if they are using something which could serve our purposes, we should try replicating that. Already, intelligence agencies mine the web for open source data, tap into social networks for information, use human sources on the ground, and experiment with crowdsourcing analysis alongside assessments from country experts. All of these methods have applications for predicting and preventing genocide and the Sentinel Project is working in some way on adopting each one.
So what comes next? One thing that comes to mind is a personal pet project of mine – the use of unmanned aerial vehicles (UAVs) – more commonly known as “drones” – for humanitarian purposes. Mark Hanis and his colleague Andrew Stobo Sniderman made the case for doing this in their recent New York Times piece called “Drones for Human Rights.” Despite the bad name given to UAVs by their use as weapons in Afghanistan, Pakistan, and elsewhere, they are used much more commonly for reconnaissance and surveillance. That’s an asset with huge potential value for human rights groups, especially when it comes to mass atrocities. This is a case where if we can do it, we should do it. As Hanis and Sniderman put it, “If human rights organizations can spy on evil, they should.” 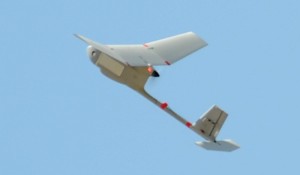 A small UAV in flight (Source: see below)

So if we know that we should do it, the question then becomes “can we do it?” In short, once again, yes we can. It’s true that just as with satellite imagery, activists won’t be able to access tools with the kinds of capabilities that governments have, but we don’t need to. Cheap alternatives exist that will serve our purposes. For example, why buy or lease a UAV for hundreds of thousands of dollars when we can build our own for only hundreds or thousands? In its most basic form, a UAV is basically just a remote controlled airplane or helicopter with a camera on it. There are already people who build them for fun, so why not tap into a community of hobbyists and put their skills towards a good cause? Even further, I’m in favor of organizing a competition for teams of engineering students from different schools to compete at creating the best humanitarian UAV on a budget.
Sure, this is all easier said than done and it would involve a lot of work, but the payoff would be worth the effort. Imagine being able to send a UAV into the inaccessible border regions of Burma to record military attacks against ethnic minority villages. Better yet, imagine being able to see them approaching and warn the people in danger. Those areas have little to no internet or mobile phone connectivity, so our more typical means of gathering information don’t work. On a smaller scale, think of a protest like those we’ve seen in Egypt’s Tahrir Square. Now imagine that instead of shaky cell phone images and the occasional news footage, the world could watch live video streaming from a quadcopter that fits in a backpack and can be piloted from an app on someone’s phone. That definitely provides a new perspective when security forces come and start cracking down. The best part is that it’s not new – people are already doing it, as this video from CNN shows. Sure, there are risks, but the people resisting oppression are already facing great risks every day, so why not give them better tools to tell their story?
With our focus on technology and innovation to support early warning and ultimately the prevention of genocide, developing UAVs obviously has great potential for the Sentinel Project and other human rights groups. They’re not the ultimate answer for predicting and preventing genocide, but definitely have a place in our intelligence toolbox.
Image source article: “Drones for Human Rights: Brilliant or Foolish? (Updated)“