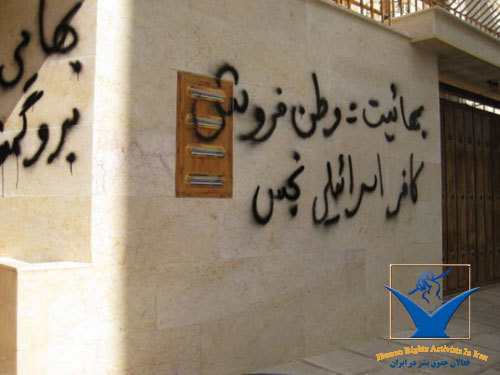 [written by Andrew Miller]
The act of genocide requires years of preparation since an attempt to wipe out a culture or a group through mass killings can’t be planned over night. Before purchasing the weapons and rounding up the victims, society needs to be persuaded to hate the target population, or at least become ambivalent toward them. This may sound like something that happens organically in certain places around the world but fortunately it isn’t and history has revealed a template of psychological markers and behaviors that precede genocide. The Bahá’ís of Iran have been outcasts from society since the foundation of their religion over one hundred years ago, and psycho-social red flags similar to those from previous genocides – such as the use of derogatory terms like “perverse sect” – have been found in Iranian government documents. Historically, genocidal societies learn to use terms like parasites and cockroaches to describe the victims.
A common theme in genocidal violence is a sense of “us” versus “them.” This in-group, out-group conflict can manifest in a couple of different ways. Typically, it’s a sense of nationalist superiority, as seen in Nazi Germany, or ethnically-based superiority, like the Hutus and Tutsis in Rwanda. Such thinking begins with the identification of the in-group followed by reinforcement of in-group superiority. The Nazis believed that Germans were better than all other humans because of their “Aryan blood.” Jewish Germans, even those whose families had lived in Germany for generations, were excluded from the in-group by virtue of their religion. Even physical features were attributed to groups with claims that someone could have the “look of a Jew.” In Iran, Bahá’ís are excluded for the same reason. Thanks to the teachings of the imams, Shi’a society, like Nazi society, is closed so that out-group members cannot join even after living amongst the majority for decades. 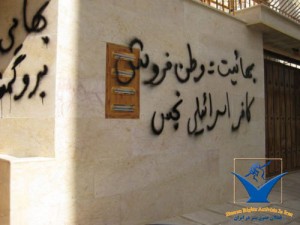 Since the 1979 Iranian Revolution, the government has been purposely and publically excluding Bahá’ís from holding government, military, and educational positions. The targeting here is religiously rather than racially or ethnically motivated. Bahá’ís see their faith as a continuation of the Islamic faith but the imams, the religious and political leaders of the Shi’a faith, see them as heretics. Decades of Iranian government propaganda cemented false beliefs about Bahá’í teachings and lifestyles, creating a strong anti-Bahá’í feeling in the Iranian Islamic community.

A Bahá’í cemetery bulldozed by government officials in the city of Najafabad, Iran – September 2007.

A population’s culture can make it to be more likely to engage in genocide. The Iranian people are predominantly Shi’a Muslim and they follow the guidance of the theocratic Supreme Leader, who claims the spiritual and political leadership of Islam. The Supreme Leader Ayatollah Khamenei, as well all current and most previous Iranian leaders, distrusts the Bahá’í. These leaders claim that the religious group is a political party created to undermine Shi’a order on behalf of foreign powers, particularly Israel. In the Shi’a faith, the imams are the people’s connection to God and it is their job to interpret and preach divine law. As far as devout Shi’a Iranians are concerned, an imam’s word is the word of God. A society such as Iran’s, with a disposition to follow strong religious leadership – especially one promoting an exclusionary ideology – could be persuaded to attack non-members, especially when they are seen as a threat to the nation or the faith.
The questions most people ask after hearing of genocide is: How could this have happened? What kind of person could do this?
Psychologists asked the same questions after the Holocaust. Their research found shocking evidence that anyone could be persuaded to participate. Stanley Milgram, a Harvard psychologist, created what became known as the now infamous Milgram Experiment. In this study, a volunteer called “Teacher” asked a series of questions to what they thought was another volunteer but was really a hired actor, called “Learner.” When the learner gave a wrong answer the Teacher was to apply an electric shock to the Learner, increasing the voltage with each incorrect answer. Skinner found that just over 65% of Teachers would give a lethal shock when ordered to. Footage of the participants shows that they were visibly very upset by what was happening but continued to shock the Learner. Other, similar studies reveal that simply being ordered to assist in genocide tends to be enough to convince most people to participate, or at the very least, to refuse to interfere.
With the insight that researchers like Skinner have provided and the examples from the past, it is clear that Bahá’ís are potential targets for genocide. Despite all of this there is no way to know for certain that genocide will occur. Released confidential Iranian government documents reveal that there is not likely a current plan to physically destroy the Bahá’í community, just one to force them out of mainstream society. The social pressures on the Bahá’í have been in place for decades and despite small-scale killings, they have never been the target of large, organized campaign of violence. The evidence discovered indicates that the framework is there and that genocide is possible, but that it is likely that there would have to be some form of shock or threat that would trigger an escalation of Iranian efforts from exclusion to execution.
There are, however, some problems on the horizon likely to spark violence. The European Union accounts for one-fifth of Iranian oil exports, and the coming EU ban on Iranian oil will strain the economy, possibly to the point of collapse. Rising tensions with Israel and the threat of open war will likely lead to more problems for the Bahá’í since for decades the group has been accused of supporting Israel and spying for the West. The Bahá’í community could be targeted as a scapegoat if war breaks out and the Iranian regime is not able to effectively strike back at the external threat. 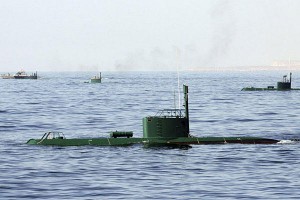 An Iranian submarine patrols the Strait of Hormuz. This strategic passage is one of many potential flashpoints between Iran and other countries. Open conflict could severely worsen internal repression within Iran.

To forecast whether there likely to be a campaign of violence against Iranian Bahá’ís in the next 3-5 years, we can use the Eight Stages of Genocide to analyze the situation. Classification is the first of these and it is clear that Bahá’ís have been identified and forced out of society. The next two steps – symbolization and dehumanization – are not currently as severe as that seen in past cases of genocide. For instance, the language referring to the Bahá’í is offensive but being called a perverse sect does not constitute dehumanization, at least from our current perspective.
Steps four and five – organization and polarization – are present but it is unclear how prevalent their influence is. As stated above, the Supreme Leader has control over the country’s primary religion and can theoretically command the people to fight against any declared enemy but what we don’t know, and hopefully won’t find out, is if he would actually order genocidal violence and whether citizens would actually obey. The military and police – who are the most likely perpetrators of genocide – are loyal to the state and if the Supreme Leader gives the order, they are likely to obey.
Preparation, the sixth step, is partially in effect. Bahá’í leaders have been imprisoned and the police and intelligence agencies have been ordered to identify and monitor Bahá’í community members. There have also been instances when property has been destroyed and vandalized, as well as seized through questionable legal actions, but that does not mean that anyone in Iran is ready to kill tens of thousands of people. The final two stages – extermination and denial – are fortunately not happening at this point. Although the nature of genocide is difficult to predict, it is unlikely that in the next six to twelve months the Bahá’í will be killed en masse. This is the point of the research that our team from the Mercyhurst University Chapter of the Sentinel Project is conducting and our forthcoming report will address the likelihood that the Iranian government will attempt genocide on the Bahá’í over the next 3-5 years. Over the next ten weeks, we will be sharing our key findings and methods of assessing this issue, so watch this space!