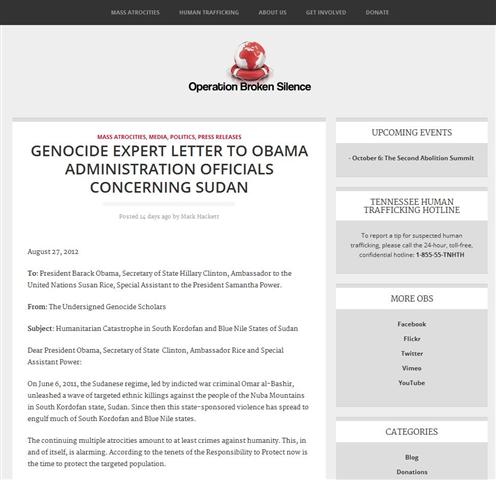 Screenshot of letter to the Obama Administration concerning the crisis in Sudan.

A group of 67 of the world’s top genocide experts from 10 different countries are calling on the Obama Administration to launch an immediate humanitarian intervention in Sudan.
On 27 August, an open letter was issued by Operation Broken Silence detailing the targeted ethnic killings and deliberate humanitarian blockade by the Sudanese government led by indicted war criminal Omar al-Bashir in the regions of South Kordofan and Blue Nile.
The letter calls for the Obama Administration to live up to the responsibilities outlined in the internationally-recognized Responsibility to Protect doctrine and the UN Convention on the Prevention and Punishment of the Crime of Genocide.
“The Sudanese regime continues to slaughter its own civilians, while denying them access to aid and in defiance of various international treaties and conventions it has signed, not to mention the Sudanese constitution,” the letter states.
The letter and signatories can be found online at:
http://www.operationbrokensilence.org/2012/08/genocide-scholar-letter-to-obama-administration-officials-concerning-sudan
Posted in: genocideletterobama administrationsudan