0 Items
The Sentinel Project > Blog > General News > Twenty Years After Rwanda, the Media is Still Failing to Report on Genocide

Twenty Years After Rwanda, the Media is Still Failing to Report on Genocide 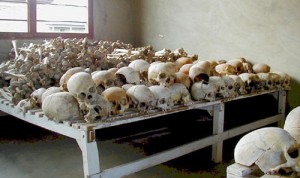 Before he was murdered by the SS in a Riga Ghetto in 1941, Jewish historian Simon Dubnow assigned a mission to the victims and bystanders of genocide: “Write and record!” The witnesses of the holocaust heeded Dubnow; they knew intuitively that the comissions assigned to investigate genocide after the conclusion of the Second World War would rely on documentation, written testimonies, and recorded memories to prove a crime whose mechanical processes always entailed denial and erasure.
This year marks the twentieth anniversary of the genocide in Rwanda. If we can take any lesson from a campaign of murder which claimed up to a million lives, it would be to add another caveat to Dubnow’s warning: broadcast. The media largely ignored the nation-wide killing campaign in Rwanda until nearly a quarter million had been slaughtered in the most efficient genocide of our time. It would seem the only thing as contemptible as the crime of genocide is the world’s capacity to ignore it, to forget it, and to allow it to occur again and again.
In Burma, the processes that precede genocide are hard at work. A Muslim minority, known as the Rohingya, are subject to state-sanctioned violence, marriage restrictions, totalitarian-like concentration camps, forced birth restrictions, and are denied medical aid, citizenship, and legal protection. They are regarded by their killers as all victims of genocide are – as subhumans and even non-humans. A prominent Buddhist monk Wirathu has called them Wolves, Wild Elephants, African Catfish – anything but human beings. Viewing a group of people as animals is essential to modern genocide – it facilitates killing with a cruelty that goes beyond mere killing. As one Rwandan recalled “You would see an infant who was just learning to smile. and it smiled at you. You still killed it.”[1]
The mass muder in Rwanda began April 6th, 1994, with a chilling radio broadcast announcing a “final war” to “exerminate the cockroaches.”[2] Every Hutu and moderate Tutsi was to be slaughtered. The role of the media was paramount. Rwandan radio station RTLM broadcast extermination lists with the locations of those to be killed and instructions to the killers.
Yet amid the media’s capacity for evil, we have an opportunity to use the media for good as well. My appeal to the media of civilized nations is this: write, record, and broadcast. The world needs to know before it’s too late.
[1]”Genocide: Worse than War.” https://www.youtube.com/watch?v=w7cZuhqSzzc&feature=youtu.be
[2]”The Impact of Hate Media in Rwanda.” http://news.bbc.co.uk/2/hi/africa/3257748.stm